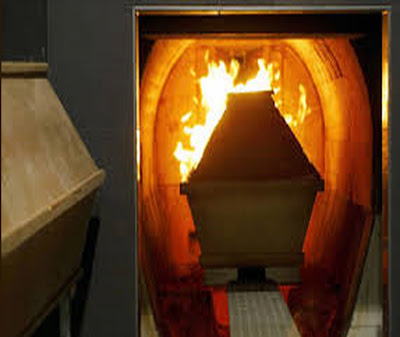 By St. Nikolai Velimirovich (Written in 1956)


You ask me, why is the Orthodox Church against cremation. First of all, because it considers it violent. The Serbs still shudder with the crime of Sinan Pasha, who burned the dead body of St. Sava in Vratsa.


Do people burn dead horses, dogs, cats and monkeys? I have not heard of this. I have heard of and seen them buried. Why should the dead bodies of people who are the lords of all animals on earth endure violence? Would it not be in all respects much more reasonable to incinerate dead animals, especially in big cities, than people?


Second, because this pagan and barbaric habit disappeared from Europe thanks to Christian civilization two thousand years ago. Anyone who wants to reinstate it doesn't do anything else, neither civilized nor modern nor new, but something ancient which has long expired.


In England, which one can hardly call uncivilized, this form of Neopaganism is very much hated by the people. To tell you a case: during the years of World War II a famous Yugoslav lost his mind. When asked before he died, he said his only desire was to have his body burned.


In our day, our little Yugoslavian community was reduced in the incinerator of Golders Green. When the dead bodies entered the burning furnace we began to tremble with horror. Then they shouted to us on the opposite side of the furnace, "wait a quarter of an hour to see your compatriot in the form of ashes". We waited over an hour and were mystified why the fire struggled with the dead body, and we asked the stoker about this. He apologized saying the furnace was cold, "it is not heated every day, since rarely do volunteers get handed over to the fire". Listening to this we were dissolved, unable to wait at the edge for our compatriot. And we know that in London over a thousand human beings die every day.


I am in America, I saw the graves of the great Presidents Wilson, Roosevelt, Lincoln and many other important persons. None of them are cremated. Now this surprised me, that among the descendants of Saint Sava there could be found those who are like-minded with Sinan Pasha!


But why create an issue that has already been solved? If we want to be loaded with unnecessary worries, then someday we could be troubled by the question on whether to kill our decrepit men and women as do some primitive tribes? And we will create clubs to propagate this "idea"!


Finally, what sense is there in fighting the cemeteries, particularly in this country where the cemetery serves as a national pride, as a source of inspiration, and if you will as the book of the state?

Peace to you and health from God.