Prayer is the daughter of the fulfilment of the Gospel commandments, and is at the same time the mother of all the virtues, according to the general opinion of the Holy Fathers. ( Saint Ignaty Brianchaninov ) 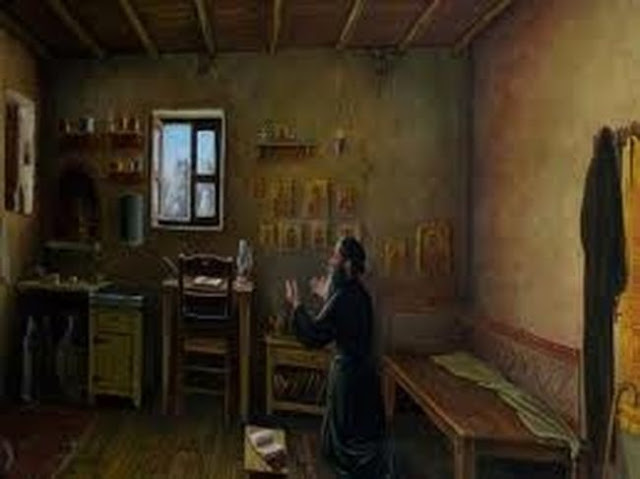 Prayer is the daughter of the fulfilment of the Gospel commandments, and is at the same time the mother of all the virtues, according to the general opinion of the Holy Fathers. Prayer produces virtues from the union of the human spirit with the Spirit of the Lord. The virtues which produce prayer differ from the virtues which prayer produces; the former are of the soul, the latter—of the spirit. Prayer is primarily the fulfilment of the first and chief commandment of those two, commandments in which are concentrated the Law, the Prophets and the Gospel.  It is impossible for a person to turn with all his thought, with all his strength and with all his being towards God, except by the action of prayer, when it rises from the dead and, by the power of grace, comes to life as if it received a soul.

Prayer is the mirror of the monk's progress.  By examining his prayer a monk discerns whether he has attained salvation or is still in distress on the troubled sea of the passions outside the sacred harbour. As a guide to such discernment he has the divinely inspired David who, talking prayerfully to God, said:
By this I know that Thou delightest in me,
that my enemy does not triumph over me.
And because of my innocence Thou hast helped me
and secured me in Thy presence for ever.

This means: I have learned, O Lord, that Thou hast shown me kindness and hast taken me to Thyself on account of my constant and victorious rejection, by the power of prayer, of all enemy thoughts, images and feelings. This kindness of God to man appears when a person feels kindness and mercy towards all his neighbours and forgives all offenders.

Prayer should be a monk's chief task. It should be the centre and heart of all his activities. By means of prayer a monk clings to the Lord in the closest manner and is united in one spirit with the Lord.  From his very entry into the monastery, it is essential to learn to pray properly, so that in prayer and by means of prayer he may work out his salvation. Regularity, progress and proficiency  in prayer are opposed by our corrupt nature and by the fallen angels who strive their utmost to keep us in their slavery, in the fallen state of aversion from God which is common to men and fallen angels.

Selections from The Arena