The Triumph of the Church ( St. John Chrysostom ) 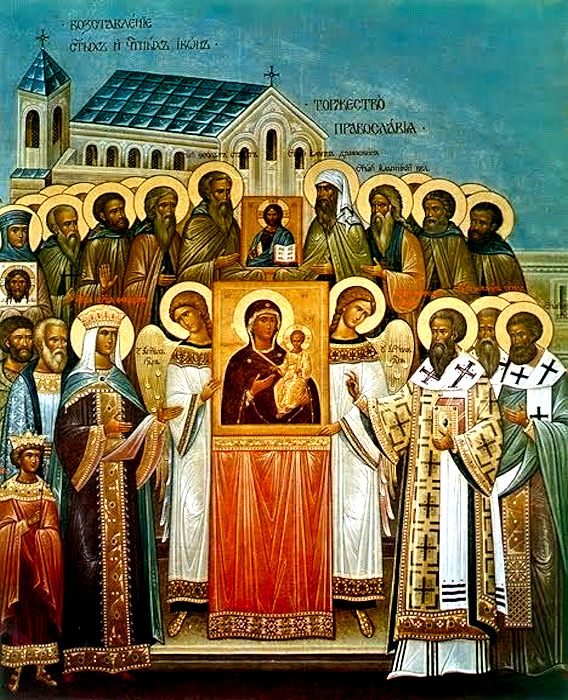 "How does one prove that Christ is God?
We should not try to answer this question by using the argument of the creation of heaven and earth, because the unbeliever will not accept it. If we tell him that He raised the dead, healed the blind, expelled demons, he still will not agree. If we tell him that He promised us resurrection from the dead, the kingdom of heaven, and ineffable goods, not only he will not agree, but also he will laugh at us.
How then shall we lead him to the faith, especially when he is not spiritually developed? Surely, we shall do this by resting on truths which are acceptable both to us and to him without any dispute or shadow of doubt.
We shall start from the fact that Christ planted the Church in the world. What is the point then that we absolutely agree upon? It is the fact that Christ planted the Church. It is by this means that we shall reveal the power and prove the divinity of Christ. We shall see that it is impossible to regard the dissemination of Christianity in the whole wide world in such a short period of time as a human work. And indeed, when Christian ethics invites people who have bad habits and are slaves to sin to a higher life. And yet, the Lord managed to liberate from such things not only us, but the entire human species.
Christ’s superbly wondrous achievement is the Church. He achieved this without using arms, without spending money, without mobilizing armies, without causing wars. He achieved it by starting only with twelve disciples, who were insignificant, uneducated, poor, naked, unarmed…
It was with such human resource that He succeeded in persuading the nations to think correctly, not only in the present life, but also in the life which is to come. He managed to nullify the ancestral laws, to uproot ancient customs, and to plant new ones. He managed to detach man from an easy way of life and to lead him to a difficult one. He managed all these things, although all fought against Him, and He had to endure a degrading crucifixion and an ignominious death!
This superbly wondrous achievement is not human. Surely, such things do not occur to human beings. What occurs is the exact opposite. In other words, as long as they are alive and prosper their work progresses. When, however, they die, what they created is destroyed along with them. This is endured not only by the rich or the leading ones, but also by the chief governors. This is so, because their laws are abolished, their memory is obliterated, and their names are forgotten, while their intimate associates are pushed aside. These things occur to those who originally governed the nations by a mere nod, and led to war grand armies; to those who condemned to death and recalled the exiled. To the Lord, however, it was the exact opposite that occurred.

It is superbly wondrous because it was achieved by the Crucified Christ. Before the crucifixion the state of his work looked pitiful. Judas betrayed Him. Peter denied Him. The rest of the Disciples fled in order to save their lives, while many believers abandoned Him. He was left alone among enemies. And yet, after the slaughter and the death, so that you may learn that the Crucified Christ was not a mere man, all things became brighter, jollier, and glorious.
Peter, the head Apostle, who before the crucifixion did not bear the threat of a maidservant, but after so many heavenly teachings and his participation in the divine mysteries said that he does not know the Lord, the same one after the crucifixion preached Him to the ends of the world. Innumerable martyrs were sacrificed, because they preferred to be put to death than to deny Christ, as the head Apostle had denied Him after being intimidated by a young maiden.

The expansion of the Church in spite of the persecutions proves the incomparable and unconquerable power of Christ. Did you see the incomparable power of Him who achieved all these wonders? How is it possible that people who are undergoing such horrid martyrdoms feel no sorrow? And yet, they rejoiced, and were elated! This is what St. Luke the Evangelist adduces as an example, when he says about the Apostles that “they left from the council rejoicing, because they were proved worthy to be ill-treated for the shake of Christ” (Acts 5:41). While no one can build even a wall with stones and plaster when is persecuted, the Apostles built up the Church throughout the world while sufferings persecutions, imprisonments, exiles and deaths as martyrs. They did not build her up with stones, but with souls –which is much more difficult; since it is not the same to build a wall as to persuade perverted souls to change their manner of life, to abandon their demonic madness and to follow the life of virtue. They achieved this, because they had with them the unconquerable power of the Lord, who had prophesied; “I will build up my Church, and the powers of Hell will not prevail against her” (Matthew 16:18).

Consider how many tyrants fought the Church and how many persecutions they raised against it… Augustus, Tiberius, Gaius, Nero, Vespasian, Titus and their successors right down to Constantine, were all idolaters. All of them –some more moderately, and some more harshly– fought the Church. Even if some of them did not raise persecutions, nevertheless, their attachment to idolatry motivated those who wanted to flatter them to oppose the Church. In spite of all this, the evil schemes and attacks of the idolaters were dissolved as cobwebs, scattered like dust, vanished like smoke. Besides, what were planned against the Church became the occasion of great benefits for the Christians. The reason was that such plans created choruses of martyrs, who constitute the treasure, the pillars, and towers of the Church.

The wondrous fulfillment of what Christ prophesied about the Church reveals most clearly his true Godhead. Do you see the wondrous fulfillment of this prophesy? Indeed, “the powers of Hell cannot prevail against her.” Looking at what came to pass, believe what is to come. No one in the future will be able to prevail against the Church. If they did not manage to crush her when she numbered but a few members, when her teaching seemed novel and strange, when so many terrible wars and so many persecutions were raised against her from everywhere, much more they will not manage to injure her today, when she has spread in the whole world, and increased her dominion among all nations, abolishing their pagan altars and idols, their festivals and celebrations, the smoke and the smell of their abominable sacrifices. How did the Apostles achieve such a great, such an important task, after so many obstacles? Surely, it was by the divine and unconquerable power of Him, who prophesied about the creation and triumph of His Church. No one can deny this, unless he is mindless and completely unable to think."