St. Porphyrios and the Hippies 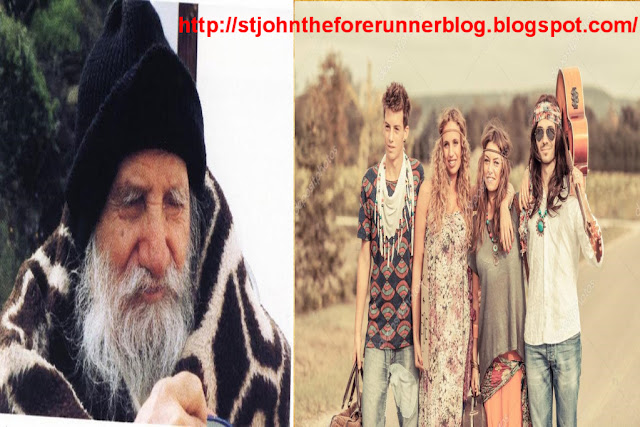 One day a hippie visited me. He was dressed in something colorful, strange clothes, and wore an amulet and jewelery, and he asked to see me. The nuns were worried, so they came and asked me, and I told them to have him enter. As soon as he sat across from me, I could see his soul. He had a good soul, but was wounded which was why he was a revolutionary.

I spoke to him with love and he was moved. "Elder", he said, "nobody until today has ever spoken to me like this." I had told him his name, and he was confused as if I knew him. "Well," I told him, "God revealed your name and that you travelled as far as India where you met a guru and you followed him." He was in even greater wonder. I told him other things about himself, and he left pleased. The next week he arrived with a group of hippies.

They all gathered together within my cell and sat around me. A girl was also with them. I liked them very much. They were good souls, but wounded. I did not speak to them about Christ, because I saw they weren't ready to hear of it. I spoke their own language about topics that interested them. When we were finished and they got up to leave, they told me: "Elder, we would like a favor: allow us to kiss your feet." I was embarrassed, but what could I do, I allowed them. After they gave me a blanket as a gift. I will call for it to be brought, so you can see it. It's very nice. After a time the girl visited me, the hippie, by herself. They called her Maria.

I saw that Maria was more advanced in her soul than her friends and she was the first I spoke to about Christ. She received my words. She has come other times, and has taken a good path. Maria also told her friends: "Hey naughty children, I would never have imagined that I would come to know Christ through hippie friends."
St. Porphyrios
Posted by Agapi en Xristo at 7:23 PM No comments: