The Ten Drachmas: The Lord in the Guise of a Woman ( St. Nikolai Velimirovich ) 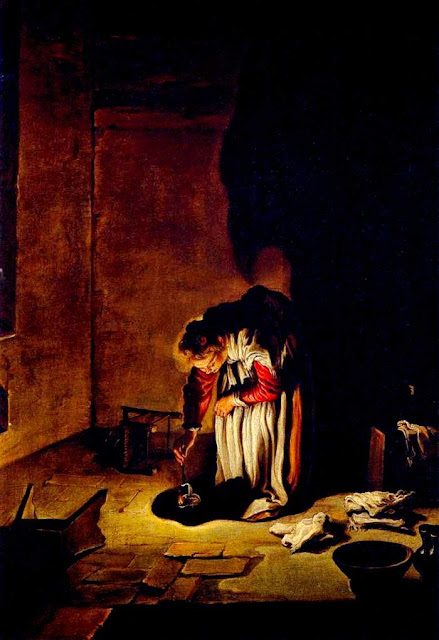 Can you believe that Christ the Saviour portrayed Himself in the guise of a woman in two of His parables?
One is that of the woman who took three measures of flour and made dough. But first let us speak of the other one where the Lord tells us about the woman who had ten drachmas and lost one. These are the most mysterious of all the Saviour's parables. As the parable of the lost drachma is short, we quote it in full.

Or what woman, having ten drachmas, if she lose one, does not light a candle and sweep the house and look diligently till she finds it? And after she has found it, she calls in her friends and neighbors and says, Rejoice with me, for I have found the drachma that I lost (Luke 15:8-9).


At first glance this parable seems so simple, or even naive, that it does not impress the reader of the Gospel. In fact, however, the mystery of the universe is revealed in this simple parable.


If we take it literally, it evokes bewilderment. The woman lost only one drachma. Even ten drachmas do not represent a great sum; in fact, a woman who has only ten drachmas must be very poor indeed. Let us assume, first of all, that the finding of the lost drachma meant a great gain for her. Yet it still presents a paradox, for how is it that if she is such a poor woman she lights lamps, sweeps the house and calls in all her friends and neighbors to share her joy. And all because of one drachma! Such a waste of time-lighting a candle and setting the house in order first of all! Furthermore, if she invites her neighbors she is obliged, according to Eastern custom, to offer them something to eat and drink, no small expense for a poor woman. To fail to do so would be to ignore an unalterable custom.


Another important point to note is that she did not invite only one woman to whom she might have offered sweets, which would not have involved great expense. But she invited many friends and neighbors, and even if she entertained them modestly the expense would far exceed the value of the drachma she had found. Why then should she seek the drachma so diligently and rejoice at finding it, only to lose it again in another way? If we try to understand this parable in its literal sense, it does not fit into the frame of everyday life, but leaves the impression of something exaggerated and incomprehensible. So let us try to discover its mystical or hidden meaning. Who is the woman? And why is it a woman and not a man, when a man is more likely to lose money in the ordinary routine of life? Whose house is it that she sweeps and fills with light? Who are her friends and neighbors? If we look for the spiritual instead of the literal meaning of the parable we shall find the answers to those questions. The Lord said, Seek and ye shall find.


The woman represents Jesus Christ Himself, the Son of God. The ten drachmas are His. It is He Who has lost one of them and sets out to look for it. The drachmas are not coins of gold or silver. According to Orthodox theologians, the number ten represents fulness. The nine unlost drachmas are the nine orders of angels. The number of angels is beyond the grasp of mortals, for it exceeds our power of calculation. The lost drachma represents mankind in its entirety. Therefore Christ the Saviour came down from heaven to earth, to His house, and lit a candle, the light of the knowledge of Himself. He cleaned out the house-that is, He purified the world of diabolic impurity-and found the lost drachma, erring and lost humanity. Then He called his friends and neighbors (after His glorious Resurrection and Ascension), that is to say, all the countless hosts of the cherubim and seraphim, angels and archangels, and revealed to them His great joy. Rejoice with Me. I have found the lost drachma! That means: I have found men to fill the void in the Kingdom of Heaven, caused by the fall of the proud angels who apostasized from God. At the end of time the number of these found and saved souls will have grown to billions, or, in the language of Scripture, will be as countless as the stars in the sky and the sand on the seashore.


Our Lord described Himself as a woman because women are more careful than men in looking after property, in keeping the house in order and in receiving guests. If this short parable, which consists of only two sentences, is explained in this way, whose heart will not tremble? for it contains the whole tragedy of the world, visible and invisible. It explains why the Son of God came to earth. It sheds a bright ray of light on the history of mankind and the tragedy of each individual's existence. It confronts us with an urgent decision, because our life is swiftly passing-a decision as to whether we want to be the lost drachma found by Christ or not. Christ is looking for us. Are we going to hide from him, or let ourselves be found by Him before death hides us from Him, from the world and from life?

It is a vital question and it lies within our will to accept or reject Him. After death it will cease to be an open question, and then no one will expect an answer from us.


And again Jesus said, To what shall I compare the Kingdom of God? It is like leaven that a woman took and hid in three measures of flour till the whole was leavened (Luke 13:20-21).


This is another of Christ's mysterious parables that many find hard to understand. The actual theme taken from everyday life is simple and clear. From the earliest times housewives have been bakers; they take flour, put it in bowls, prepare leaven, knead the dough and bake it. It has been the daily task of the housewife in East and West for thousands of years. But it occurred to no one to take this simple work as a figure or symbol of the Kingdom of God. Only the Lord Jesus Christ, to Whom nothing was too simple or unimportant, took this familiar chore and used it to explain something stupendous and extraordinary. He could picture to Himself His own mother at work.


I will put the following questions to the reader of the Gospel. Why did Christ take woman as His example, instead of man, when men have been bakers throughout the centuries? And why the leaven, when unleavened bread was also commonly used? And why did the woman take three measures, and not one or two or four? Finally, what connection or similarity is there between the reign of God and the kitchen work of a housewife?

If these questions cannot be answered, how can we understand the parable? Yet to answer them without a spiritual key would only lead to further difficulties. All the parables deal with the superficial, but their real meaning lies deep down. They appeal to the eye and seem obvious enough, but they concern the spirit and the spiritual.


This parable has a twofold spiritual interpretation. The first has to do with the three principal races of mankind, the second with the three main faculties or powers of the human soul. In brief, what is outstanding and unusual in this parable is the historical and personal process of man's salvation.


After the Great Flood, there stemmed from the sons of Noah-Shem, Ham and Japheth-three races of mankind, the Semites, Chemites and Japhetites. These are the three measures of flour into which Christ puts His heavenly leaven-the Holy Spirit. That means He came as Messiah and Saviour to all the races and nations of mankind without exception. Just as with leaven a woman can transform natural flour into bread, so Christ, through the Holy Spirit, transforms natural men into the children of God, into immortal inhabitants of the Heavenly Kingdom. That is why, according to Orthodox teaching, holy men are called earthly angels or heavenly men, because, being "leavened" by the Holy Spirit, they are no longer common flour or unleavened biscuits that lie on the earth, but they are leavened bread that has risen. According to the Bible, unleavened bread was the bread of slaves while leavened bread was for free men, God's children. So for that reason the Orthodox Church uses leavened bread at Holy Communion. The process of leavening began on that first Trinity Sunday or Pentecost, when the Holy Spirit descended from heaven onto the apostles. From that day forth this process has continued down to the present day, and it will continue till the end of time when all will be leavened. This, then, is the historical interpretation of the enigmatic parable about the woman baker. The second interpretation is psychological and personal, and concerns the three main faculties or powers of the human soul: intellect, heart and will, or, in other words, the power to think, the power to feel and the power to act. These are the three unseen measures of the soul of the inner man. These three powers either remain totally unleavened, like the bread of slaves, or they are leavened with the leaven of malice and hypocrisy. Therefore, Christ told His disciples to beware of the leaven of the Pharisees which is hypocrisy, because that is the worldly and human leaven, which weakens all the powers of the soul and leaves it crippled and sick. But Christ the Saviour brought to earth a new leaven to raise the powers of the soul. Those who receive this new heavenly leaven through Baptism in the name of the Holy Trinity are called the sons and daughters of God, the heirs of the eternal Kingdom. They will not die, for even when they leave the body, they will be alive and will live for ever. This heavenly leaven fills them with the light of reason, the warmth of divine love and the glory of good works. All three powers of the soul grow together in harmony, and ascend to heaven, to perfection. As the Lord said, Be ye perfect as your heavenly Father is perfect.


Woman has been taken as paragon and not man, and Christ has compared Himself to a woman baker, because woman as wife and mother prepares bread for the family in a loving manner, whereas the man baker bakes bread to sell for gain. Everything that Christ has done for mankind was done out of pure love, and therefore He compares Himself to a woman baker. This is the second interpretation, but both interpretations of this parable are correct. The historical and the psychological meaning derived from this simple parable is like a branching oak that grows out of an acorn, for it is truly majestic in its historical breadth and profound in its psychological depth.