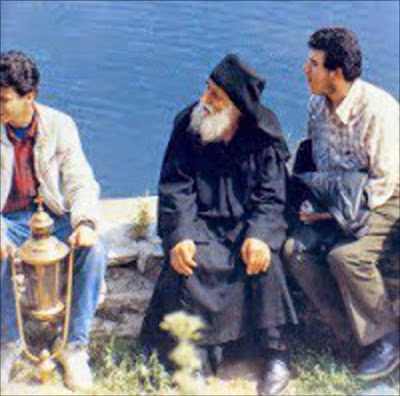 I once visited Father Paisios with a student of theology who was at a critical stage. He asked him about his studies. The student naively told him about a work of his dealing with the creation of man. At one point he told Father Paisios: "At one point God didn’t know what to do, so He formed Adam and Eve, to pass His time." I saw Father Paisios with lightning speed raise his hand and gave him a heavy smack. The student lost it, became dizzy, he stood briefly with bulging eyes trying to realize what happened, and then he began to cry, sobbing like a small child.

Father Paisios was looking at him, not saying anything, and let him cry. After much weeping, he said: "Blessed one, what is this that you said? Come with me." He took him by the hand, like a mother with a young child, and brought him to the sink and said: "Wash your face." Then he gave him a towel to wipe his face of the tears and brought him back to his seat. He then began with humor, tenderness and much love to indicate his error, and to say that we should not speak about God and His work with indecency. Moreover, he even wrote a graceful dedication in one of his books and gave it to him. Needless to say, I followed this entire scene speechless and ecstatic.


When I would visit him, after asking his advice on issues dealing with my personal life, I would ask him about issues I was facing with my spiritual children. I told him about a child who was very lively and reactive and asked for an opinion on how to treat him. He replied disarmingly: "Do what a mule driver does with the animal. Hold him securely by the reins and sit far away so you don’t get kicked."
When I recall my memories of that holy figure, I am moved, I shed tears and I pray. May we have his holy prayers.
Metropolitan Hierotheos of Nafpaktos
Excerpt from the book Μαρτυρίες Προσκυνητῶν – Γέροντας Παϊσιος ὁ Ἁγιορείτης – 1924-1994, σὲλ 43-44, ἐκδόσεις Ἁγιοτοκος Καππαδοκίας, Νικόλαος Α. Ζουρνατζόγλου, ἐπισμηναγὸς Ε.Α.
Posted by Agapi en Xristo at 3:13 PM No comments: