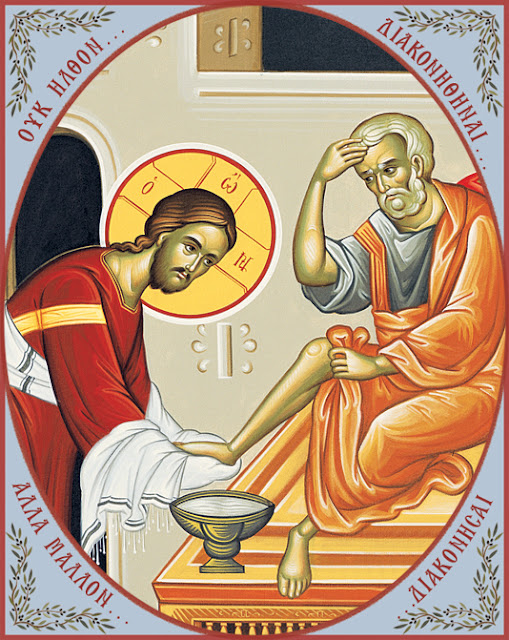 Christ washing the feet of the Disciples: "I came not to be served, but to serve..."

For four hundred years now, on the pleasantly cool island of divine visions, holy little Patmos, on Great Thursday every year, there’s been a tradition of re-enacting the drama of the Last Supper, which neither time nor the years of subjugation to the Turks, Italians and Germans were able to expunge.
This re-enactment, a symbolic scene, is a celebration which involves a great deal of grandeur, religious feeling and picturesqueness. It takes place to this day in other places as well, including, in the Orthodox world, Jerusalem and Antioch.
It’s an important event in the holy days of Great Week, not only for the island of Patmos, but for the other islands in the area: Samos, Ikaria, Leros, Kalymnos, and, in former times, for the coastal towns and cities of Asia Minor on the opposite shore.
At the time of the Italian occupation, the number of pilgrims who came to the island to attend this wonderful ceremony was considerably fewer, but since the liberation, the ceremony of the Washing of the Feet has regained its former eminence so that, in the peaceful life of the island, it is, once more, a religious event of great significance.
There is evidence for this religious ceremony of the Washing of the Feet from the 4thcentury, to be precise after the synod of Elvira in about 300 A. D. It was performed in very many monasteries and bishoprics in the middle years. In particular, the Byzantine emperors in their palace, in imitation of the gentle Nazarene, washed the feet of twelve of the poor among their subjects and afterwards presented them with gifts.
The whole ceremony, or rather its symbolic re-enactment, is nothing more nor less than a recollection and replication of the practical teaching of the Lord, who wished simply, by His example of washing the feet of his disciples, to teach stark humility towards the other people who share the planet with us.
On Great Wednesday, in one of the two large squares in Hora (those of Xanthou and Patriarch Theofilos II) alternately, towards the evening, a large, wooden, squarish platform is erected by a construction team of the elders of the town. Around it, the child play wild games of hide and seek. Decorating begins in the very early hours of Great Thursday. Liturgical fans and silver crosses, at intervals, with arches of palms and myrtles and with valuable carpets on the ground make for a grand sight.
The entrance, the central arch, is made of the fragrant spring flowers of the island, dominated by the blossoms on the twigs of spikenard, with its faintest of scents. On the platform, twelve seats have been placed. Six on the right and six on the left. And in the centre, opposite the entrance a chair for the Abbot. In the centre, there’s a little table with a silver bowl on it.
The tall trees surrounding the square- Xanthou, that is- with their verdant foliage cast their protective shade on the congregation of the faithful, beneath the burning spring sun. In complete silence, with moving compunction, they follow the swift development of this religious performance by the monks, brothers of the monastery, who perform the role of the disciples in this re-enactment of the divine drama of the Last Supper.
Great Thursday. The time is eleven in the morning. In the monastery, the Divine Liturgy of Saint Basil the Great has ended, with the handing out of the antidoro, the blessed bread, the “pearl” which people on the island keep for difficult times, especially someone’s last moments. With the Abbot at their head, the monks of the monastery move down to the church of the community, that of the Great Mother of God, as if by ancient custom. All the priests are attired in the same, precious, purple and gold, Byzantine vestments, gifts to the monastery from the Byzantine era, which have survived wonderfully to this day, untouched by time. 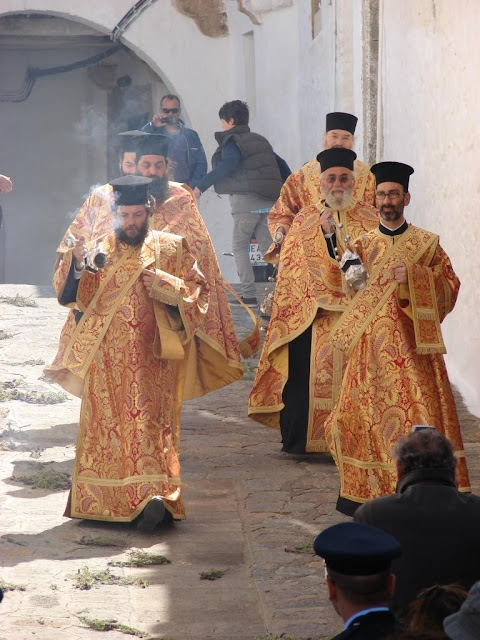 Priests and Deacons proceeding to the town square for the service (

The great bells of the monastery toll gravely and slowly. The whole atmosphere of the island resounds sweetly to their deep peals. In the delighful natural environment of spring, everything is charming. With heightened religious emotions, with deep compunction, the island lives the holy Passion of Christ for the whole of this week in a unique way and with a special tone.
From the Great Mother of God, the priests, each one with the name of one of Jesus’ disciples, proceed in twos to the appointed square. Behind them comes the abbot in a purple robe, holding his staff- since he’s a Patriarchal Exarch- and a small, gilded Bible, flanked by four deacons. All of them, priests and Abbot, wear their monastic cowls, which lend gravity and a graphic tone to the measured proceedings. Before them walks an ordinary monk, holding a huge basin and the “water of the bowl” in a silver pot. The ecclesiarch brings up the rear. As the best chanter in the monastery, it’s his job to sing psalm 50, “Have mercy on me, God”. The disciples and the Teacher arrive at one of the two chapels- Saint Foteini or Saint George, depending on the square- where the ceremony will take place. The ecclesiarch takes his position first, opposite the platform, at a prominent point, from where he will read the appointed excerpts from the four Gospels.
The four deacons cense the approach and escort the priest-disciples, two by two, onto the platform, where they bow deeply to each other and then take their seats, beginning from the outside and working inwards. They follow that order as given in the Gospels, starting with the sons of Zebedee. And thus they continue until all twelve are seated. The last one is Judas. In former days, his role was assigned to an ordinary layman, who was rewarded with 50 small coins and a cottage cheese. Later, however, the role was given to a monk. Last comes the Abbot and the four deacons escort him onto the platform, standing at his side. In the meantime, the ecclesiarch chants the beautiful Byzantine melodies for “When the glorious disciples were enlightened at the washing of the feet at the supper” (dismissal hymn) and “United in the bond of love, the Apostles…” (katavasia, canticle five).
Once everyone is seated on the platform the whole drama of the Holy Last Supper begins to unfold. 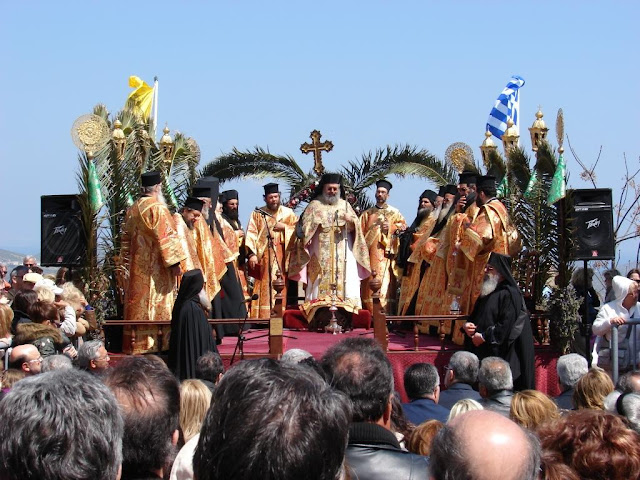 The Abbot of the Monastery of St. John the Theologian in the role of Christ, before 12 Priests in the roles of the Disciples

It has been divided into three parts and in the first there is a wide-ranging lesson from the great teacher of love, concerning the phrase “love one another”, which is full of incident and divinely-inspired significance. After this, there follows the second part, which is the washing of the disciples’ feet as a practical demonstration of Christ’s humility. The third part is a reconstruction of Christ’s anguish at prayer on the Mount of Olives, when He’s tested as a person, finally triumphing as God.
From his prominent position, the reader, methodically and slowly reads excerpts from the Gospels of Matthew, Mark and John, referring to the dialogue conducted between the Teacher and His disciples. The first to be read is from Saint Mark: “At that time, Jesus took his twelve disciples and began to tell them what would happen to him”. Then follows a dialogue taken from John (4, 10-11), Mathew (20, 22-9) and Mark (10, 32-45), explaining to them what was to happen and urging them warmly to love one another.
Then, after this dialogue, comes the second part, the washing of the disciples’ feet: The reader’s text is from Saint John: “Knowing that the Father had given everything into his hands, Jesus arose from the supper and removed his outer garment. He took a towel and fastened it around his waist. Then he poured water into a basin and began to wash the disciples’ feet…”. At that moment, the Abbot ties a dark red, square, velvet vestment, the “towel”, round his waist and begins to pour water from the pot into the bowl. Beginning with Judas, he washes the disciples’ feet, in fact sprinkling them on their shins with rose water through an aspergillum. This is the most impressive part of the scene, together with the role of Saint Peter, who is rebuked for his initial refusal and then goes on to request that the Lord wash “not only my feet, but also my hands and head”.
“Then Jesus came with them to a place called Gethsemane, and said to the disciples, Sit here, while I go and pray over there. And he took with him Peter and the two sons of Zebedee, and began to be sorrowful and very troubled”. At this point, the Abbot, together with the three disciples mentioned, descends from the platform and proceeds towards the edge of the square, while the disciples kneel on cushions in front of the platform, obeying His command to “wait here and keep watch”.
This is when the third part of the Last Supper is played out. It is when Christ’s soul is sick unto death and when He cries aloud “not as I wish, but you”. But at the same time, the disciples’ devotion to their teacher is also tested, at the most difficult part of the drama. At the edge of the square, the Abbot prays before the icon of “The Coming One”, a large, very old icon from an iconostas, of rare Byzantine craftsmanship, one of the treasures of the monastery. It’s a symbolic depiction of the prayer of Christ on the Mount of Olives. 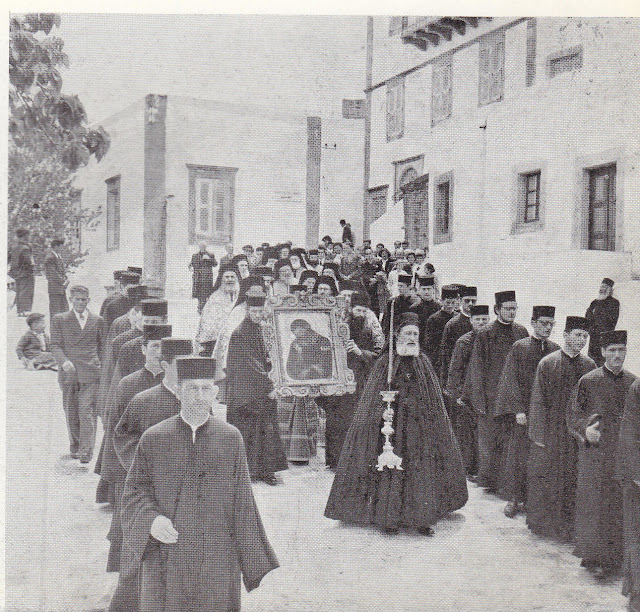 A photograph of the procession in prior years. The monks are carrying the historic icon of Christ "The Coming One"

“Father, if it is possible, let this cup pass”. And again: “Nevertheless, not as I wish, but you” (Math. 26, 40-42). Apprehension and sorrow weigh heavily on Him. And He repeats: “Is it not possible for this cup to pass?” When he turns to His disciples, He find then with drooping eyelids. He turns back to pray to His heavenly Father, strengthened now in the role He’s been ordered to shoulder for the salvation of the human race. He shouts to His disciples: “Let’s go. It’s time for the Son of Man to be betrayed in order that he may be glorified”, rousing them from their deep sleep when He approaches them for the third time.
The three get up from their knees and go back to the platform, together with the Abbot. The symbolic re-enactment of the Last Supper ends here. The Abbot takes up position near the platform and holds the Gospel and a small bunch of marjoram with which he will sprinkle the crowd with the blessed water from the basin. The laity kiss the Gospel and embrace, wishing each other “Many years”.
Finally, with the same good order and with the monastery bells tolling, the monks return to their place of abode, the grey Byzantine fortress which has been a sacred ark over many centuries.
And the people, inducted into divine matters and with souls exalted, disperse to their homes, in order to continue the rest of Great Week with the same depth of compunction, on the island of Patmos where Saint John the Evangelist had his divinely-inspired visions. 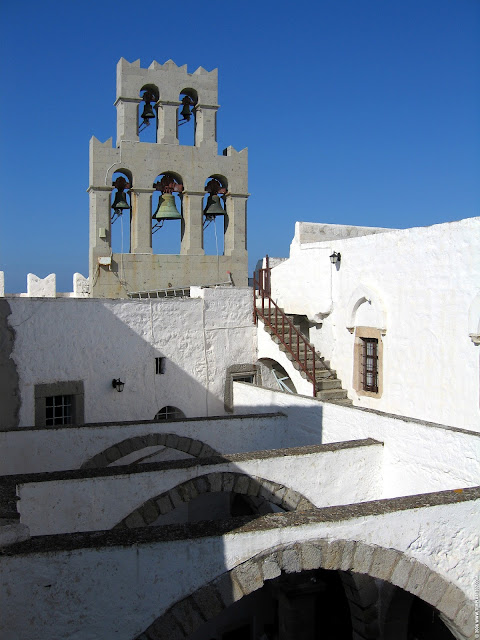 The Monastery of St. John the Theologian, Patmos

Through the prayers of our Holy Fathers, Lord Jesus Christ our God, have mercy on us and save us! Amen!

source:http://full-of-grace-and-truth.blogspot.ca/2013/05/the-ceremony-of-washing-of-feet-on-holy.html
Posted by Agapi en Xristo at 5:52 PM No comments: