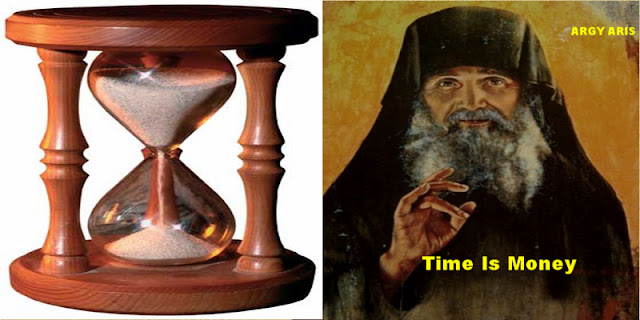 Time is the currency with which we acquire eternity. The ancients would say, “time is money.”
Indeed, time is a currency of incalculable value. We do not need even one dollar to purchase eternity; all we need is one minute. How did the thief on the cross acquire Paradise? He did so with one minute. Actually, it took him less than a minute to confess Jesus Christ, to seek His mercy, and to utter with sincere repentance, “Remember me, O Lord, in Your Kingdom.” This is why the Apostle Paul exclaims, “See then that you walk circumspectly, not as fools but as wise, redeeming the time, because the days are evil”(Eph. 5:15-16). Behold, the greatest purchase of all time! Let us rush to acquire Paradise. We have the means. It will be the best investment of our life, because Paradise is forever.
Ioasaf, who went on to become a saint of our Orthodox Church, was the son of the King of India. Saint Barlaam instructed him in the Christian faith and baptized him. One of the many things Righteous Barlaam taught him was the following:
“In a certain land, the citizens had the custom of electing as their king a foreigner who would come
to visit their city.
The unsuspecting visitor would accept their offer because he was unaware of their customs and practices. They would crown the visitor and enthrone him king for a certain period of time, only to dethrone him a short time later , without a warning and exile him to a desolate region. Since
they never revealed to the stranger that within
six months to a year they would strip him of his regal title and send him into exile, the visitor ruled the land assuming that he would reign forever,
until the end of his life. The thought of exile would never even cross his mind, and, unmindful
of the citizens’ intent to banish him, he never
prepared for such a calamity.
During one such trip to the city by a particular visitor, a good and virtuous citizen who saw
the foreigner approached him and told him in secret, “My fellow countrymen who dwell in this city are planning to make you a king. You should
realize, however, that after a short period of time they will exile you. So, now when you become king and while you have all the goods accessible to you, see to it that you send food, provisions,
and other useful items to that deserted region, so that when they banish you to that land you will
have them there waiting for you, and you will be able to live comfortably.”
“Oh! Thank you very much for telling me,”replied the guest.
Indeed, by following the advice of that good citizen, this man sent an abundance of provisions to the land of exile. And so, when the time came and the citizens banished him, he went their gladly
and henceforth lived comfortably, because he had sent many goods there beforehand.
“Similarly,” explained St. Barlaam to Ioasaph, “Man comes into this present life, and, fooled by the world, he believes that he will reign and live many years; death, however, appears unexpectedly
and sends him to eternity. The Church, as
another good citizen, comes to advise man and points out to him, “Look, you are not going to be here very long. You will depart for the next life which is eternal.
Make sure, now that you are here and capable, to do good works and send them there to the next life. Thus, when you die and the world ejects you from the earth, you will find these items there. God will repay you thousand times over, and you will henceforth live joyfully.”
The time of our present life is the opportunity to sow. Eternity is the time of harvest. Tell me what you sow, and I will tell you what you will reap. Do you sow faith, love, and tears of effort and repentance? You will reap the joy of eternal
Paradise. The Lord confirms this:
“You shall receive a hundredfold, and inherit
eternal life”(Mt. 19:29).

St. Paul also emphasizes this in his epistle to
the Corinthians: “For our light affliction, which is but for a moment, is working for us a far more exceeding and eternal weight of glory” (2Cor. 4:17).