The Flock of the Theotokos 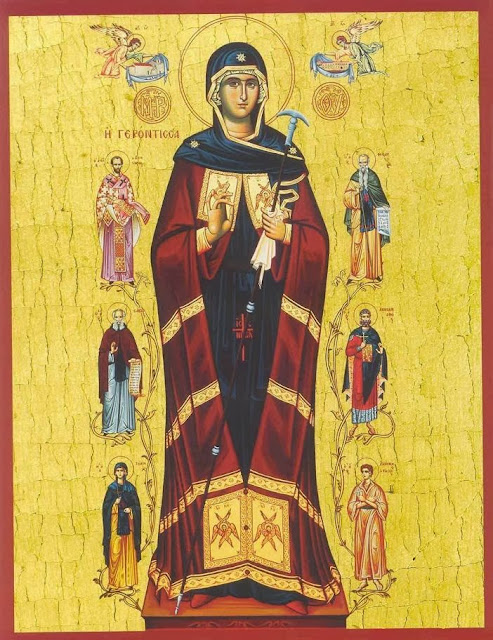 M.M. Elder, let us move onto a different topic. Speak to us on the relationship that you and every Athonite has with the Panagia.

Elder Markellos: It is Her Garden, and we are her children. Once, an Athonite monk was sick. In order to be healed, he took refuge in the Panagia of Tinos. There, of course from reverence, he slept at night within the church. In reality, therefore, Panagia visited him, but in a...unique manner. She gave him a motherly slap, saying at the same time: "What do you want here?"

He replied: "My Panagia, I came to find my health."

"Well, why didn't you call me and entreat me in my Garden? I'm there every day along with you. Was there a need to come here?" Then the poor monk lost it, and awoke thinking: "Wow, what a fool I am, what am I doing here?"

This motherly position Panagia has before all of us, and when we are pleasing before Her--according to Her promise--she gives us everything. The blessed Elder Ephraim of Katounakia said: "Are you being tempted? Grab hold of the Panagia by her dress and call upon Her! She is a mother, she will hear you." He said this with joy, and also with faith that it would thus occur. When he sought for something from the Panagia, She gave it to him.

There is a story regarding an astonishing vision having to do with the Athonite Fathers and the Most-Holy Theotokos, which depicts her many times as an Abbess, as the Gerontissa of the Holy Mountain, with Her rod and mandya. She visits, she keeps vigil, she cares for Her children.

An astonishing vision... All the resurrected Fathers followed the Panagia, who went before them, and arranged them into a large flock, the flock of the Most-Holy Theotokos. The Athonite Fathers were and are Her children, and she led them and leads them to the Kingdom of the Heavens.

An incredible vision. But once in a while, from certain graves, the Panagia did not take the Fathers. She left them there. They were those monks who did not take care in their life, who did not keep their monastic promises and their monastic duties. These cried out, mourned, wailed, entreated: "Take me too, Panagia! Take me together with You!" However, she did not take them, and they remained complaining and estranged from the great brotherhood, the Synodeia of the Most-Holy Theotokos.