Honor your spiritual Father with all your might ( St. Ephraim the Syrian ) 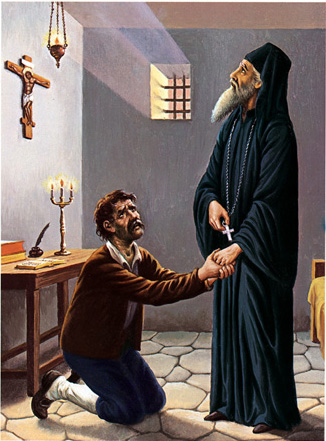 Honor your spiritual Father with all your might and do not render inefficacious the counsels of him who begat you in the Lord; for in this way, the evil demons will never prevail over you.

St. Ephraim the Syrian
Posted by Agapi en Xristo at 2:22 PM No comments:

A Christmas Tradition on the Island of Tinos.

Tinian people preserve their local manners and customs as sacred. Besides, many of those stem from ancient religious traditions. These customs survive mostly in the villages, although the Main Town also has its own traditions. In addition, the locals often combine their deep religious faith with their love for dancing and singing, regularly organizing local festivities and fairs.

A custom that proves the deep religious faith of Tinians is the lighting of Vigil Lights. It is an unwritten law, binding the locals to light all the country chapels this way every Saturday afternoon and on the eve of the celebration of a saint’s memory. Every chapel has a permanent or temporary owner, responsible for keeping the custom. Non-fulfillment of this obligation is considered a moral offence not tolerated by the locals.

This custom sometimes takes the form of a solemn religious promise. Thus, many Tinians often as a token of gratitude, supplication or thanks to a Saint, vow to go to the chapel dedicated to the Saint’s name. The pilgrims arrive at the chapel early in the morning. If the oil lamps are already lit, they add some oil to keep them burning and they leave the oil bottle they brought with them next to the candelabrum so it can be used later.

In every case, the ritual includes candle lighting and incense burning. These three ritual elements are the only material sacrifice that has survived since the early Christian years. Its nature is symbolic. Its value is not measured by the materials offered, but by the pilgrim’s devoutness. In general, oil lamp lighting represents the light in their souls. The flame symbolizes the light of the Holy Spirit and the resplendence of all the Saints who are deep in the locals’ hearts.

An old Christian custom, of monastic origin, is held during the Christmas season in Tripotamos. Every year, one family, whose leader receives the title of ‘Kavos’, takes on the responsibility of taking care of the village church, which is dedicated to the Presentation of the Virgin Mary. Among their responsibilities is to keep the oil lamp (vigil light) hanging over the Icon of the Nativity lit all year round. In addition, they keep the church clean, they pay the costs for the Christmas Divine Liturgy, the provision of candles, while they are also responsible for the making of a huge candle for the New Year’s Day Service.

On Christmas day, at noon, the Kavos invites the priest and the men – the head of families of the village – for lunch. Each one of the guests has to bring his own fork, spoon, bread and wine, all wrapped in a napkin. The Kavos has to make provisions for a lavish meal, with soup, veal stew, and braised meat with tomato sauce, stuffed vine leaves and several other local specialties. Wine is served in goblets, special mugs of hemispherical shape made of brass that are used only on this occasion.

After the meal, the priest and some of the table-companions carry the Icon of the Nativity from the church to their host’s house chanting Christmas hymns. The Icon is placed on the table, the priest hands out the holy bread, while everyone lights candles, similar to those used in the morning service. This is the moment when the priest appoints the next ‘Kavos’. After eating the traditional sweets, the Icon is taken back to church while the crowd chants Christmas hymns.

On the next day (26th of December) all the men of the village gather again in the house of the former Kavos, to finish up the leftovers from the previous day. Typically, the responsibilities of the former Kavos end with the Christmas meal. However, the oil lamp has to remain lit till the last day of the year. After Divine Liturgy on the 31st of December, there is a procession of the Icon around the houses of the village according to the custom of ‘podariko’ (= first visitor at a house on New Year’s Day is considered to bring good luck).

Today the list for the title of Kavos runs till 2025, which means that this custom is very popular with the locals. In earlier days though, the Kavos would be a last-minute choice, since most of the families were not well-off.
Posted by Agapi en Xristo at 5:30 PM No comments: 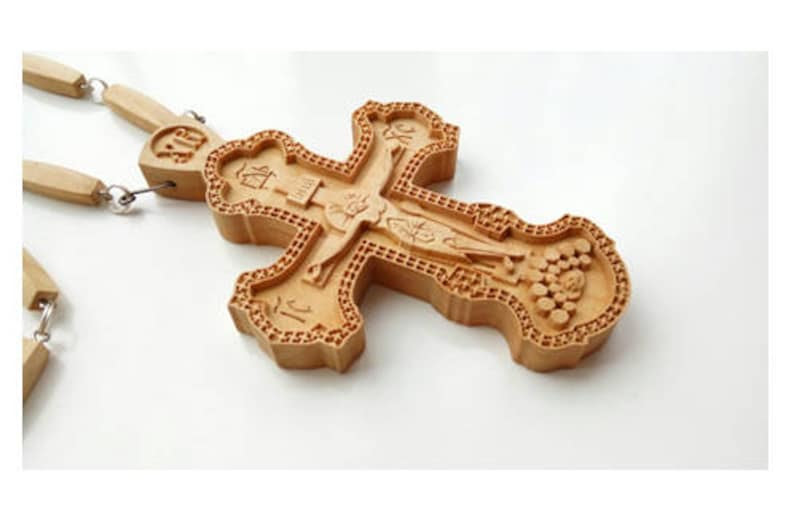 A WOODEN CROSS
In the U.S. Military you will see Officers wearing gold or brass bars to show their different ranking to the enlisted men, and women of our Arm Forces.
Whereas in the Orthodox Church, you will often see a simple Priest, high ranking Bishop, or monk wearing a wooden Cross to remind Christ forgiveness through His death, burial, resurrection.

In the Army of God, Christ is our greatest example of True humility, and servanthood.
We can read many examples of this in Christ ministry and throughout Holy Scripture:
Christ humility and humility can be understood as Our Good Shepherd when He made Himself lower then the ranks of Angels in order to be the Sacrificial Lamb for the sins of the world.

Christ Who was the Creator of the Universe was born of a Virgin, and became  dependent on the very one He created by receiving milk from her breast.
Christ Who is the Bread of Life fasted 40 days in the desert before being tempted
by the devil to turn a stone into bread.
Christ Who is the Living Water ended His ministry in thirst by becoming our curse
while hanging on a Tree.

Christ Who was innocent before His procurators, pleaded guilty in His silence, yet I
the chief of sinners stand guilty of all charges.

Galatians 3:13 "Christ hath redeemed us from the curse of the law, being made a curse
for us: for it is written, cursed is every one that hangeth on a tree."
Posted by Agapi en Xristo at 9:33 PM No comments: 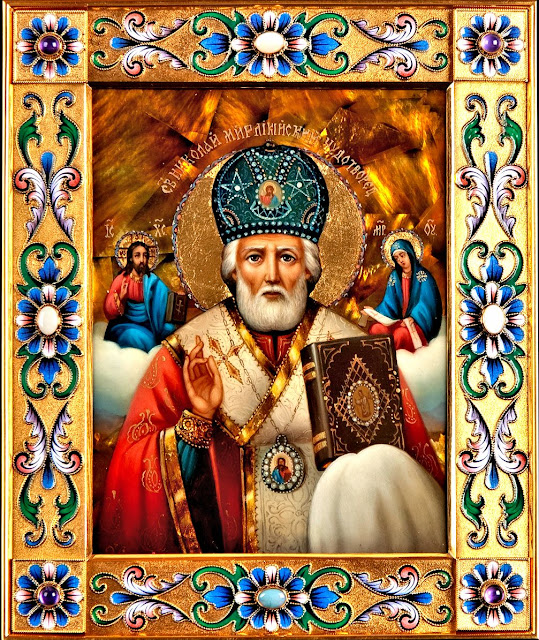 This Saint lived during the reign of Saint Constantine the Great, and reposed in 330, As a young man, he desired to espouse the solitary life. He made a pilgrimage to the holy city Jerusalem, where he found a place to withdraw to devote himself to prayer. It was made known to him, however, that this was not the will of God for him, but that he should return to his homeland to be a cause of salvation for many. He returned to Myra, and was ordained bishop. He became known for his abundant mercy, providing for the poor and needy, and delivering those who had been unjustly accused. No less was he known for his zeal for the truth. He was present at the First Ecumenical Council of the 318 Fathers at Nicaea in 325; upon hearing the blasphemies that Arius brazenly uttered against the Son of God, Saint Nicholas struck him on the face. Since the canons of the Church forbid the clergy to strike any man at all, his fellow bishops were in perplexity what disciplinary action was to be taken against this hierarch whom all revered. In the night our Lord Jesus Christ and our Lady Theotokos appeared to certain of the bishops, informing them that no action was to be taken against him, since he had acted not out of passion, but extreme love and piety. The Dismissal Hymn for holy hierarchs, The truth of things hath revealed thee to thy flock ... was written originally for Saint Nicholas. He is the patron of all travellers, and of sea-farers in particular; he is one of the best known and best loved Saints of all time.

Apolytikion of Nicholas the Wonderworker in the Fourth Tone

A model of faith and the image of gentleness, the example of your life has shown you forth to your sheep-fold to be a master of temperance. You obtained thus through being lowly, gifts from on high, and riches through poverty. Nicholas, our father and priest of priests, intercede with Christ our God that He may save our souls.

Kontakion of Nicholas the Wonderworker in the Third Tone

Saintly One, (St. Nicholas) in Myra you proved yourself a priest; for in fulfilling the Gospel of Christ, venerable One, you laid down your life for your people and saved the innocent from death. For this you were sanctified as One learned in divine grace.
Posted by Agapi en Xristo at 7:53 PM No comments: