The theory of evolution emits a foul stench.. ( Elder Joseph the Hesychast ) 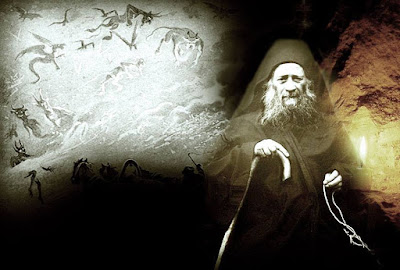 When Elder Joseph was still living at the skete of St. Basil, one day he went to a neighboring church to visit Fr. Gerasimos. That day there happened to be a certain layman visiting from the world.

When Elder Joseph saw the man, he approached him and said: “You have a mistake, a serious problem.”

The layman asked: “What mistake do I have?”
“I don’t know,” replied Elder Joseph. “All I know is that there is something seriously wrong with you.”
“Can we find out what it is?”
“We cannot determine this now during the day. If you’d like, come down to my hut tonight.”
“I will be there after midnight, Elder.”
Indeed, during the middle of the night the laymen went to visit him.
They started talking, and eventually Elder Joseph discovered that this person, who had obtained a college degree in theology, had written an entire book in support of Darwin’s theory of evolution of the species.

Elder Joseph advised him, “When you want to support a theory or opinion, why don’t you draw from the writings of the holy Fathers? A theory or viewpoint is confirmed when it is validated by either the Holy Scriptures or the holy and God-bearing Fathers.”
The theologian ultimately admitted that he had made a mistake to believe in this theory. He then asked Elder Joseph to tell him how he knew he was mistaken.

“Yesterday, as I approached you,” explained the Elder, “ I sensed a foul odor and smelled a bad stench coming from you, and from this I realized that there was something wrong with you.”

from the book My Elder Joseph the Hesychast
Posted by Agapi en Xristo at 10:06 AM No comments: