The Five Miracles of Saint Gerasimos of Kefallonia 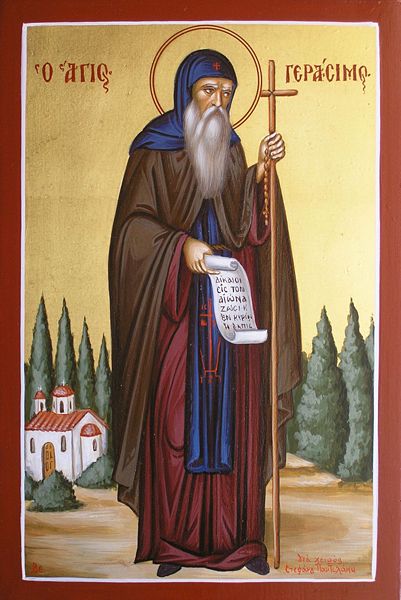 1. A Young Atheist Woman From Australia Converts To Orthodoxy and Becomes A Nun After Seeing the Incorrupt Relics of Saint Gerasimos

The powerful effect the incorrupt relics of Saint Gerasimos the New had a particular effect on a young Australian nun, Anna, who lives at St. Stephen's Monastery on Meteora. She related the following:

I came to Greece in 1988, hoping to get work as an English teacher. I wasn't of Greek parentage, nor did I have any particular interest in classical culture or the arts, but came because Greece sounded interesting. I had not been raised with any religion nor was I looking for one, but soon after I arrived I met some people who were planning to go to Kefallonia, to St. Gerasimos, and invited me along. It seemed a good way to begin seeing the country, and I agreed. When I entered the church and stood before the saint's coffin, I was stunned by what I saw - the incorrupt relics were so obviously a miracle that I knew in myself that there must be a God, and that Orthodoxy was how you worshipped Him. I was baptized and a year later I came to the monastery.

2. The Cave of Saint Gerasimos and Unbelievers

The older church containing the relics of St. Gerasimos is built directly over his cave and pilgrims are welcome to descend the ladder and squeeze through the tiny floor-level entrance that leads into the cave. Local Christians say that only believers can wriggle through the narrow passageway. The wife of an Argostoli priest has informed that, wanting a blessing for her unborn child, she had squeezed through with no trouble when she was fully nine months pregnant, but the thin, lithe young woman whom she brought with her - an unbeliever - couldn't do so.

In 1760, when an epidemic of cholera struck the island, a nun named Akakia had a vision of the saint, praying in front of an icon of the Mother of God, beseeching her to halt the epidemic. The Mother of God spoke from the icon and said, "I have asked my Son, and He will grant you this." Then the saint caught hold of a roll of a cotton-like material wrapped around his staff, and began plucking off many small pieces, scattering them into the air. That night he also appeared to another woman on the island, telling her to go quickly to her father's house - that the infection would not spread to the countryside.

The stories of these visions quickly made the rounds of the villages. One local woman, however, refused to believe the accounts, and scoffed at them saying, "These are stories for children." That night the saint appeared to her in a dream and struck her with his staff, saying, "By this children's story, through the blessing of Panagia, I dispel the sickness from this island." The next morning the woman went straight to the monastery to venerate the saint's relics, telling the nuns of her dream and showing them the bruise on her side where the saint had struck her. They all gave thanks to God. 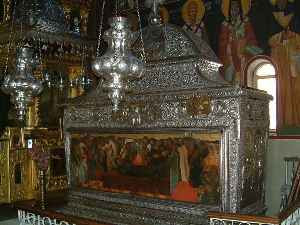 In 1785, a mentally ill woman named Susannah came to the monastery and lived there for many months. She never spoke to anyone and ate only if she was given food; otherwise, she went hungry.

One day, after she had been there almost a year she began shrieking loudly during Vespers. The priest came out of the altar and tried to calm her but she screamed all the more until the unnerved cleric finally slapped her, and she was forcibly carried out of church.

That night the priest had a dream that the saint's larnaca (coffin) opened by itself and that St. Gerasimos climbed out. He was holding a book in his hands and motioned the priest over. When the priest came up to him, he hit him hard over the head with the book and asked him, "Did that hurt?" The priest said, "Yes," and the saint responded, "And that hurt me tonight when you slapped that poor woman. Get up now, it's time to go to Matins, and don't ever do it again."

The priest awoke terrified, and ran to the church where he begged the saint's forgiveness. That morning, Susannah was again in church, but this time, she suddenly called out coherently, "Let the priest who hit me yesterday, come and give me something to eat." To the amazement of everyone who knew her, she had been healed.

In November 1807, a shipping merchant by the name of Manuel was passing the island on his way to the Peloponnese. When he was in sight of Kefallonia a huge storm blew up. The sailors did all they could to keep the ship afloat, but the intensity of the storm continued to build until they were near despair. On board was a Kefallonian sailor named Ioannis, who had a small icon of St. Gerasimos with him. Shouting to the crew, "St. Gerasimos will save us!" he threw the icon into the sea. When the icon touched the surface of the sea the waves were immediately calmed. The grateful captain ordered the crew to dock in Kefallonia, to pay homage to the saint.

Apolytikion in the First Tone

O believers, let us praise the protector of the Orthodox, the God-bearing miracle-worker lately appearing to us, the incarnate angel, divine Gerasimos. For he has rightly received from God the ever-flowing grace of performing healing. He strengthens those with diseases and he heals those with demons. And therefore he pours out healings to those who honor him.


Saint Gerasimos of Kefallonia
Posted by Agapi en Xristo at 7:27 AM No comments: