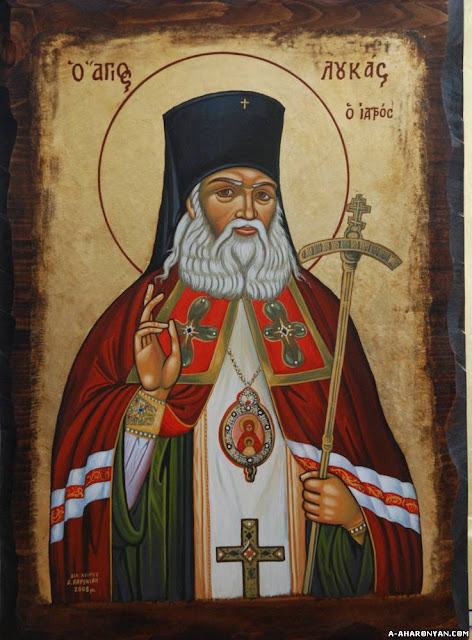 This short story is an example how the little things demonstrate our firmness in our faith. Valentine Voino-Yassenesky was a highly respected surgeon at the time of the Communist revolution in Russia. He stands as a example for us because of the faith he demonstrated in a most horrible period of persecution for Christians in Russia. He later became Bishop Luke and then was affirmed as Saint Luke the Surgeon.


Valentine's deep faith was revealed in his life and work. His love for the sick and his great interest in the suffering sprang from his faith in God. He had an icon of the Mother of God hanging in the operating room. Before an operation he would make the sign of the cross, pray, and then make a cross with iodine on the patient's body. Only after this would he get down to work.


In the beginning of 1920, however, an examination committee ordered the icon to be removed from the operating room. Doctor Valentine reacted vigorously without fearing the consequences. He left the hospital, declaring that he would return only when the icon was returned to its place. ONe of the representatives of the committee declared with a certain dose of irony: "The operating room is a place of public service. We have separated the state from the church. IF your surgeon wishes to pray, that's fine and dandy, but he should keep the icon at home!"


Valentine did not yield. One admires his courage. At a time when he was in danger of losing not only his position but even his life, the faithful doctor dared to stand up to the resolute authorities for the sake of his faith. Hie persistence and unshakable faith in God brought quick results.


The wife of one of the Party members was brought to the hospital in need of an immediate operation. She demanded that only Professor Voino-Yassenetsky operate on her. Valentine was called to the visitor's room and asked to do the operation, but he answered firmly: "I am very sorry but in accordance with my beliefs, I cannot enter the operating room until the icon is first hung in its place."