"What do you prefer, someone educated that can make you dizzy, or a saint who can wake you up?" ( Metropolitan Nicholas of Mesogaias ) 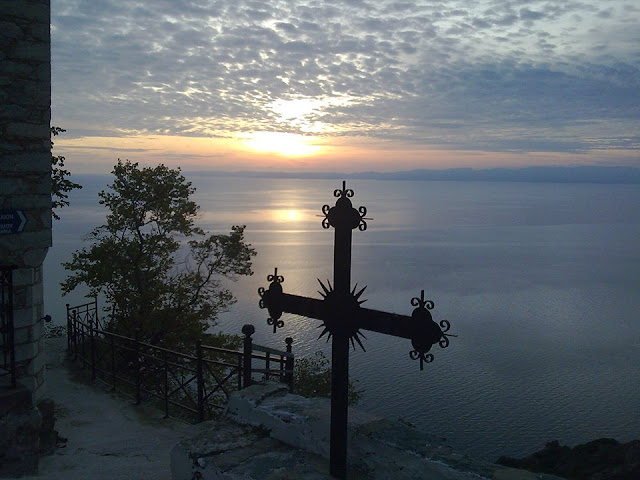 Several years ago I was approached by a young student. With great reluctance, but with the intensity of a demanding seeker, who said he was an atheist, yet would love to believe, but could not. For years he tried and searched, but to no avail.

He spoke with professors and the educated, but his thirst for something serious was not satisfied. He heard of me and decided to share with me his existential need. He asked me for scientific proof for the existence of God.

"Do you know integrals or differential equations?" I asked.

"Unfortunately no", he replied. "I am a Philosopher."

"Too bad! Because I knew one such proof", I said, obviously joking.

He felt uncomfortable and was quiet for a bit.

"Look", I said, "I'm sorry I hurt you a bit. But God is not an equation or a mathematical proof. If it were so, then all the educated would believe in Him. You should know, there are other ways to approach God. Have you ever been to Mount Athos? Have you ever met an ascetic?"

"No, Father, but I'm thinking of going, having heard so much. If you tell me, I can go even tomorrow. Do you know anyone educated to go and meet with?"

"What do you prefer? Someone educated that can make you dizzy, or a saint who can wake you up?"

"I prefer the educated. I fear saints."

"Faith is a matter of the heart. Why don't you try a saint. What is your name?" I asked.

I sent him to an ascetic. I described for him the way to access him and gave him the necessary instructions. I even sketched for him a map.

"You will go," I said, "and ask him the same thing. I am an atheist, you will tell him, and I want to believe. I want a proof of the existence of God."

"I am afraid, embarrassed", he told me.

After a few days he went and found the ascetic conversing with a young man in his yard. On the opposite side four others were sitting on some logs waiting. Among them Gabriel found a tentative seat. No more than ten minutes later the Elder finished his conversation with the young man.

"How's it going, guys?" he asked. "Have you taken a loukoumaki? Did you drink some water?"

"We thank you, Elder", they replied, with conventional secular nobility.

"Come here," he said addressing Gabriel, distinguishing him from the others. "I will take the water, and you take the box with loukoumia, and come closer so I can tell you a secret: It is fine for someone to be an atheist, but to have the name of an angel and be an atheist? This is the first time I have seen such a thing."


Our friend nearly suffered a heart attack after this revealing surprise. How did he know his name? Who revealed to him his problem? What, finally, did the Elder want to tell him?


"Father, can I speak with you for a bit?" he asked, barely able to mumble.

"Look, now it is getting dark. Take the loukoumi, drink some water, and go to the most nearby monastery to spend the night."

"My Father, I want to speak with you, is it not possible?"

"What will we say, my lad? For what reason did you come?"

"To this question I felt my breathing open immediately," he told me. "My heart was flooded with faith. My inside world was heated. My doubts were solved without any logical argument, without any discussion, without the existence of a clear answer. All the 'if's, why's and but's' were automatically destroyed, and all that remained was 'how' and 'what from this time forward'."

What the educated could not give his thoughts, was given to him with the gentle hint of a saint, who was a graduate of only the fourth grade of elementary school. The saints have much discernment. They make a surgery on you, and you feel no pain. They do a transplant without opening your stomach. They raise you to inaccessible peaks without ladders or worldly logic. They plant faith in your heart, without tiring your mind.

Posted by Agapi en Xristo at 9:38 PM No comments: