Struggles Against the Sexual Passions ( STS. BARSANUPHIUS AND JOHN ) 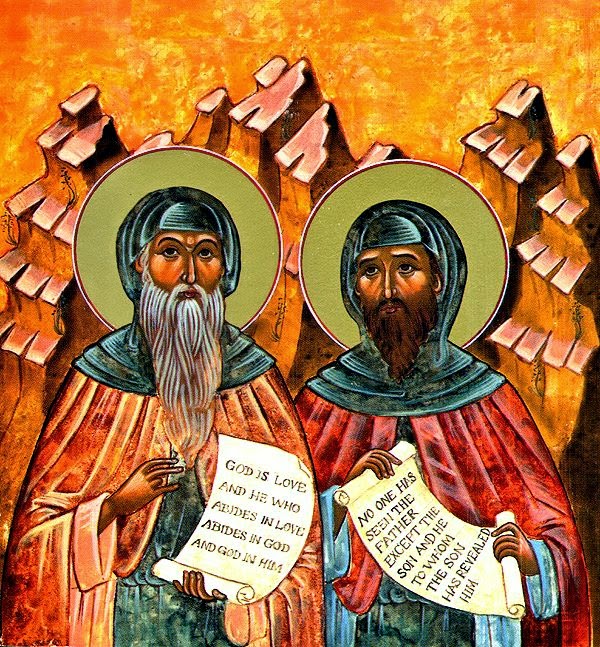 The question of Abba Dorotheus to the Great Elder:

-- Q: I am being strongly attacked by sexual passion; I am afraid that I may fall into despondency, and that from the infirmity of my body I will not be able to restrain myself; pray for me, for the Lord’s sake, and tell me, my Father, what I should do?

A: Brother! The devil, out of envy, has raised up warfare against you. Guard your eyes and do not eat until you are full. Take a little wine for the sake of the body’s infirmity of which you speak. And acquire humility, which rends all the nets of the enemy. And I, who am nothing, will do what I can, entreating God that He might deliver you from every temptation and preserve you from every evil. Do not yield to the enemy, O brother, and do not give yourself over to despondency, for this is a great joy to the enemy. Pray without ceasing, saying: “Lord Jesus Christ, deliver me from shameful passions,” and God will have mercy on you, and you will receive strength by the prayers of the Saints. Amen.

-- Q: The same brother, being attacked by the same sexual passion, asked the same Great Elder to pray for him and to tell him how to distinguish whether a man is being tempted by his own lusts or by the enemy.

A: Brother! Without labor and contrition of heart no one can be delivered from passions and please God. When a man is tempted by his own lust, this may be known from the fact that he is careless about himself and allows his heart to reflect about what he has done before; and then a man himself draws passion unto himself through his own lust. His mind, being little by little blinded by passion, begins, unnoticeable for himself, to pay attention to someone for whom he feels attraction, or to speak with him, and he finds occasions on which to converse with him or to sit with him, and by all means he strives to fulfill his desire. If one allows thoughts to pay heed in this, warfare will increase until a fall, albeit not in body but in spirit, in agreement with thoughts; and it turns that such a man lights the fire himself in his own substance. But a sober and prudent man who desires to be saved, when he sees from what it is that he suffers harm, carefully preserves himself from evil remembrances, is not drawn into passionate thoughts, avoids meetings and conversations with those for whom he feels attraction and avoids every occasion for sin, fearing lest he himself ignite a fire within himself. This is the warfare which proceeds from one’s own lust, which a man brings on himself . . .
Tame your steed with the bridle of knowledge, lest, looking here and there, he become inflamed with lust towards women and men and throw you, the horseman, to the ground. Pray to God, that He may turn “your eyes, lest they see vanity” (Psalms 118:37). And when you will acquire a manful heart, warfare will depart from you. Cleanse yourself, as wine cleanses wounds, and do not allow stench and filthiness to accumulate in you. Acquire weeping, so that it might remove from you freedom (looseness) in your relations, which destroys the souls that adopt it. Do not throw away the implement without which fertile land cannot be worked. This implement, made by the Great God, is humility: it uproots all the tares from the field of the Master and gives grace to those who dwell in it. Humility does not fall, but raises from a fall those who possess it. Love weeping with all your heart, for it also is a participant in this good work. Labor in everything to cut off your own will, for this is accounted to a man for sacrifice. This is what is meant by: “For Thee we are mortified all the day, we are accounted as sheep for slaughter” (Psalms 43:22). Do not weaken yourselves by conversations, for they will not allow you to prosper in God. Firmly bridle the organs of your senses: sight, hearing, smelling, taste, and feeling, and you will prosper by the grace of Christ. Without tortures no one is a martyr, as the Lord also has said: “In your patience possess ye your souls” (Luke 21:19), and the Apostle says, “in much endurance, in sorrows” (II Corinthians 6:4).

-- Q: Pray for me, my Father, I am very much disturbed by thoughts of sexual sin, despondency, and fear; and a thought says to me that I should converse with a brother to whom I feel attracted when I see him, lest by my silence I give him occasion for suspicion. I feel likewise that the demons are somehow pressing me, and I fall into fear.

A: Brother! You are not yet instructed in warfare with the enemy, which is why there come to you thoughts of fear, despondency, and sexual sin. Stand against them with a firm heart, for combatants, unless they labor, are not crowned, and warriors, unless they show the King their skill in battles, do not become worthy of honors. Remember what David was like. Do you not also sing: “Test me, O Lord, and try me, kindle my inwards parts and my heart” (Psalms 25:2). And again: “If a regiment arm itself against me, I will hope in Him” (Psalms 26:3). Likewise, concerning fear: “For if I should go in the midst of the shadow of death, I will fear no evil, for Thou art with me” (Psalms 22:4). And concerning despondency: “If the spirit of the powerful one should come upon thee, do not leave thy place” (Ecclesiastes 10:4).
Do you not wish to be skilled? But a man who is not tested by temptations is not skilled. It is battles that make a man skilled. The work of a monk consists of enduring battles and opposing them with manfulness of heart. But since you do not know the cunning traps of the enemy, he brings thoughts of fear and weakens your heart. You must know that God will not allow against you battles and temptations above your strength; the Apostle also teaches this, saying: “Faithful is the Lord, Who will not leave you to be tempted more than you can bear” (I Corinthians 10:13).
Brother! I also in my youth was many times and powerfully tempted by the demon of sexual sin, and I labored against such thoughts, contradicting them and not agreeing with them, but presenting before my own eyes eternal tortures. For five years I acted thus every day, and God relieved me of these thoughts. This warfare is abolished by unceasing prayer with weeping.
And the fact that the demons are pressing you proceeds from their envy; if they could, they would chase you out of your cell also; but God does not allow them to take possession of you, for they do not have authority for this. God could swiftly relieve you, but then you would not begin to oppose another passion (when it comes). May the demons not weaken you so as to turn your attention to a brother (to whom you are attracted), or to converse with him; but If you should happen unexpectedly to come together with him, against your desire, restrain your glance with fear and decency and do not listen attentively to his voice. And if this brother, out of ignorance, should himself begin to speak with you or sit next to you, then skillfully avoid him, but not suddenly, rather with decorum. Say to your thought: “Remember the terrible Judgment of God and the shame which will then overtake those who are attracted by these shameful passions.” Compel your thought, and you will receive help, by the prayers of the Saints, and God will have mercy on you. Do not be a child in mind, “but a child in malice” (I
Corinthians 14:20); in mind, O brother, be perfect. Pay heed to yourself, as to how you will meet God. Amen.
-- If you wish to be delivered from shameful passions, do not behave with anyone familiarly, especially with those toward whom your heart is inclined by a lustful passion; through this you will be delivered also from vainglory. For in vainglory is involved the pleasing of men, in the pleasing of men is involved familiarity of behavior, and familiarity of behavior is the mother of all passions.

-- Q: What should I do, my Father? I suffer from sexual passion.

A: As much as you can, wear yourself out, but according to your strength; and have hope not in this, but in love from God and in His protection, and do not give yourself over to despondency, for despondency serves as the beginning of every evil.

-- Q: What do the words you have spoken mean:
“See to it, lest you be drawn away by a thought of sexual sin?”

-- A: This happens not only with regard to sexual passion, but in other cases also. The mind is subjected to this as a consequence of distraction, and when this happens a man should cry out to himself, saying: “O Lord! Forgive me for the sake of Thy holy Name; I have been subjected to this for my negligence. Deliver me from distraction and from every net of the enemy; for Thine is the glory unto the ages. Amen.” And let the following be for you the sign by which you may know that you are drawn away: if one is speaking with others and his mind is distracted here and there, it happens that when he speaks of one thing his thought passes over to something else; this is what it is to be drawn away. Likewise, if anyone is doing something and passes over in thought to something else; in his forgetfulness he either ruins what he is doing or does something more than necessary, and this is likewise (a case of) being drawn away. In the same way a sexual thought draws us away. It happens that one is conversing with another, and if the enemy succeeds in drawing his mind away from God-pleasing sobriety, then, as a consequence of distraction, a sexual desire appears in the mind. And this is likewise a drawing away, because it has happened not from reflection or remembrance, but a man is drawn away by it out of forgetfulness. And such a one is like a traveller who, by reason of grief that comes upon him, goes away from the straight road and finds himself on another road. But coming back to himself, a man should call out to himself, according to what has been said above, and hasten to God’s mercy. The Lord is merciful and will accept him like the prodigal son; we know with what mercilessness He accepted the latter. But when this warfare arises in the mind even without distraction, one must be sober, not take enjoyment of such thoughts, no tarry in them, but all the sooner hasten to God the Master.