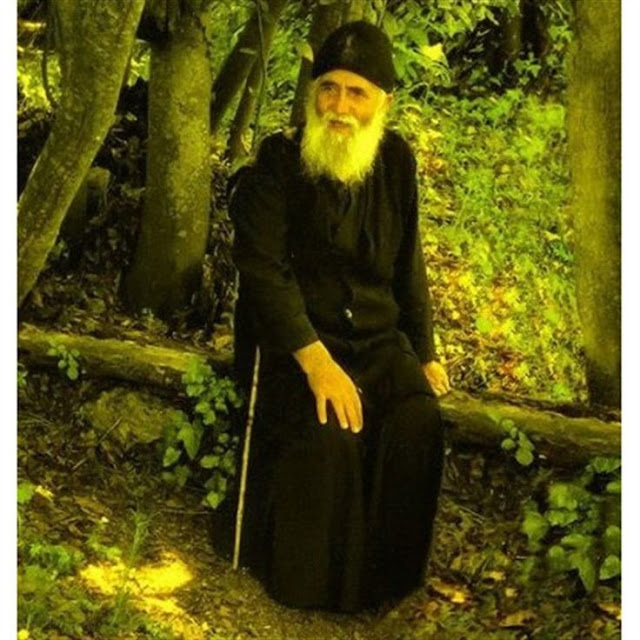 When We Sin We Give Rights to Temptation

There is so much demonic influence in the world today. The devil is roaming free because people have given him the right to do so and they are vulnerable to horrific attacks by him. Once someone rightly said: "In the old days the devil was preoccupied with human beings; not anymore. He shows people the way, tells them 'farewell', and off they go." It's terrible! You see, when the demons wanted to enter the swine in the country of the Gadarenes, they asked for Christ's permission - since the swine had not given the devil an excuse, he did not have the right to possess them. Christ allowed this to happen so that the Israelites, who were forbidden from eating pork, may be punished.

- Geronda, some people say that the devil does not exist.

- I know; someone told me that I should take out of the French translation of Saint Arsenios the Cappadocian all references to demonic possession, because Europeans will not understand it; they don't believe in the existence of the devil. You see, they explain everything with psychology. But if they took to psychiatrists the possessed of the Gospel there would be no end to electroshocks. Christ has removed from the devil the right to do harm. The devil can harm us only if we allow him to have power over us. Those who do not participate in the Mysteries of the Church give rights to temptation and become vulnerable to demonic influence.

- Geronda, in what other ways can one give rights to the devil?

- Rationalism, contradiction, stubbornness, willfulness, disobedience, and insolence all are qualities of the devil. People are vulnerable to the degree that they have these qualities. But when the soul is purified, the Holy Spirit enters a man and fills him with Grace. On the contrary, when it is infected with mortal sin, the unclean spirit dwells in him. When, again, the soul is not mortally infected, then, it is merely under the influence of the evil spirit.
It is unfortunate that nowadays people don't want to curb their passions and their will; they do not accept anyone's advice. From this point on, they speak with insolence and reject the Grace of God. As a result, anything they undertake does not prosper because it is subject to satanic influences. Man is beside himself because the devil directs him from the outside. The devil is not inside the man, God forbid, but even from the outside, he can take over and run a person's life.

When divine Grace "departs" from a man, he becomes worse than the devil. For, there are things that the cunning devil himself will not do; instead, he will urge men to do them for him. He does not, for instance, commit crimes; he has man do them for him. That is how people end up being possessed.


Confession Deprives the Devil of His Rights

If people only went to a Spiritual Father to confess their sins, the demonic influence would cease, and they would be able to think more clearly. Nowadays, they can-not even think because of demonic influence. Repentance and confession deprive the devil of his rights over us.

Recently, a sorcerer came to the Holy Mountain and blocked the road with sticks and nets, near my Kalyvi. Anyone passing through there, who had not been to confession, would have been harmed and would have no idea why. As soon as I saw them, I crossed myself, went through and broke the spell. Later on, the sorcerer came to my Kalyvi and told me about his evil schemes and burned his books. The devil has neither power nor dominion over those who have faith, go to Church regularly and receive Holy Communion. He just barks a little "arf, arf!" like a dog without teeth. But he has great power over one who has no faith and gives him the excuse to take over. He can lynch him and tear him to pieces with his teeth. The devil's authority upon a soul depends on the rights this soul has granted him.

Even when a soul dies in good order, as it rises to Heaven, the devil follows behind. It's like a train moving with tremendous speed, while dogs are running after it and in front of it, barking and occasionally some of them getting run over. But if one is not in good spiritual order, the train cannot go with speed, because its wheels are damaged, dogs will enter through its open doors and bite some passengers.

When the devil has been allowed to acquire great rights over a man and has him in his grip, the cause that will bring his power to an end must be found. Otherwise, no matter how intensely the others pray for someone, the devil will not leave him. The devil will cripple a man. Priests may do exorcisms over and over again, but the possessed man ends up paying the price since the devil will then torture him even more because of the exorcisms. Unless we repent and go to confession, and destroy the rights that the devil has over us, he will not go away and we will always be troubled. As long as the devil has these rights, he will not go away even if one reads and rereads exorcisms for days, weeks, months or years.

The Devil Will Not Approach a Pure Creature of God


- Geronda, why am I overwhelmed by passions?


If one gives in to temptations, he is seized by the passions. What God wants from you - which is for your benefit too - is to take your passions and throw them at the devil's face. Turn your anger, your stubbornness and so on against him. Or, what is even better, "sell" your passions to the devil and use the money to buy "stones" to throw at him and keep him at a distance. Most often, we human beings allow the enemy to harm us by giving him all kinds of excuses either through carelessness or through proud thoughts. The devil can even take advantage of the will naturally have greater authority over him. The devil acquires more and more rights.

- Geronda, suppose a person who has lived carelessly by giving the devil authority over him decides to start a new life, by putting things in order and living carefully, will that person be fought by the devil? -
When these people turn around, God gives them strength, illumination and divine consolation to get them started. But as soon as the struggle begins, the enemy will fight them fiercely. At that point patience and perseverance is needed. Otherwise, how can the passions be uprooted? How can the old man shed his garment? How can pride go away? This is how we realize that we can do nothing on our own, and we humbly ask for God's mercy; it is then that humility comes. The same happens with someone who wants to give up a bad habit, for instance smoking or drugs. At first, he feels happy with his decision and throws them away. Then, he sees other people smoking, drinking or whatever and a fierce battle begins. If he overcomes the temptation, he turns his back to the habit without difficulty. All of us need to resist a little. The devil does his job; shouldn't we do ours?

We Should Not Start a Conversation With the Devil

All of us have some inherited weaknesses but these cause us no harm. For instance, one may be born with a little mole on the face. A mole might make someone look beautiful, but if it is scratched it might also cause cancer. We should not let the devil scratch our passions. If we let him do that, "cancer" may occur.

- Geronda, the demons scare me.
- What are you afraid of? The devil has no power. Christ is All-powerful. The tempter is rotten. Don't you wear a cross? The devil's weapons are weak. Christ has armed us with His Cross. Only when we abandon our spiritual armour is the enemy strong. An Orthodox priest had only to show a small cross to a sorcerer and the demon he had invoked started trembling.

- Why is the devil so afraid of the Cross?
- Because when Christ received the spitting, the blows and the beatings, the kingdom and the power of the devil were crushed. How wonderful is the way in which Christ defeated the devil! "The devil's dominion was crushed with a reed," used to say a Saint. When Christ was given the last blow with a reed, at that very moment, the devil's power was destroyed. In other words, patience is our spiritual defence and humility our greatest weapon against the devil. The greatest balm that Christ's sacrifice on the Cross gave us is the crushing of the devil. After the Crucifixion of Christ, the devil is like a snake with no fangs, with no poison; he is like a wild dog without teeth. All poison was removed from the devil; all teeth were removed from the wild dogs that are the demons. So, they are now disarmed, while we are armed with the Cross. There is nothing, really nothing that the demons can do to a creature of God when we ourselves don't hand over rights to them. They only make noise; they have no authority over people.

- Geronda, did the demons become so ugly when they fell and from angels they became demons?

- Of course! And it's like they have been struck by lightning. When lightning strikes a tree, doesn't it turn into a charred stump? The demons look like that. For a while, I used to say to the devil, "Come by so that I can see what you look like and avoid falling into your hands. Just a look is enough to see how evil you are. Should you get me, there's no telling how much I will suffer."