And when the king came in to see the guests, he saw there a man which had not on a wedding garment. (Matt. 22:11) 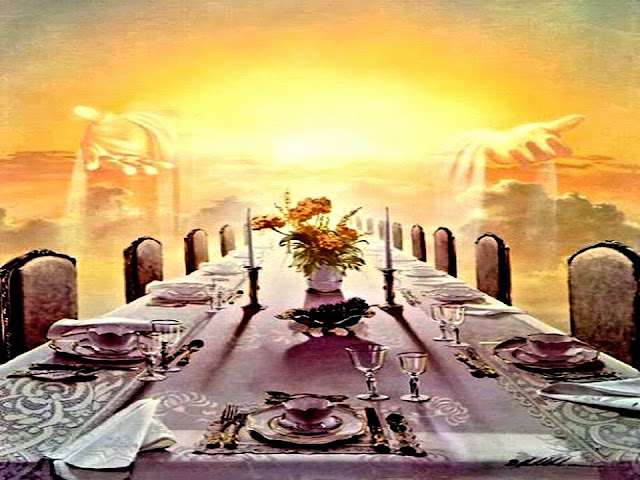 And when the king came in to see the guests, he saw there a man which had not on a wedding garment. (Matt. 22:11)


What is meant, brethren, by this wedding garment? It cannot signify either baptism or faith, because who can enter this marriage feast without baptism or without faith? Because undoubtedly the mere fact of not believing excludes one from the Church. So what can we understand by this wedding garment but charity? We must suppose then, that this man enters without a wedding garment who is a member of our Holy Church by reason of his faith, but who lacks charity. It is so called with good reason because our Maker wore it when He came as a bridegroom to unite Himself to the Church. There was no other means than God's love by which the Only-begotten could unite the souls of the elect with Himself. This is why John tells us: God so loved the world, that He gave His only-begotten Son (John 3:16). He who came to men for love's sake, calls this love the wedding garment. All of you, then, who are members of the Church and believe in God have indeed come to the marriage, but you are without a wedding garment if you discard the cloak of charity. If any of you is invited to an earthly wedding, he changes his dress so that he may show the groom and bride his participation in their joy; he would be ashamed to appear shabbily dressed among the guests and merry-makers. We assist at God's marriage feast and nevertheless, we are loath to undergo a change of heart. The angels rejoice when they see God's chosen ones admitted into heaven. How do we visualize this spiritual banquet, those of us who lack that festive garment which is the only one that gives us beauty in God's sight?

We know that the love which we owe to our neighbor is sub-divided into two precepts, as we read in Scripture: See thou never do to another what thou wouldst hate to have done to thee by another (Tob. 4:16), and Christ tells us: As you would that men should do to you, do you also to them (Matt. 7:12). If we act towards our neighbor as we should like him to act towards us, and avoid doing to others what would be displeasing to us ourselves, then we observe the law of charity. But no one should think that he observes this law merely because he loves his neighbor; he must examine first the motive behind his love. For he who loves others, but not for God's sake, has not charity, even though he may think he has. True charity lies in loving our friend with and in God, and our enemy for God's sake. He loves for God's sake, who loves even those by whom he is not loved. Charity is usually proved only by the opposing trial of hatred. So that our Lord says, Love your enemies. Do good to them that hate you (Luke 6:27). The man who loves his avowed enemies is following this command. Great and sublime are these precepts and often hard to obey; nevertheless they constitute the wedding garment. And that man who is without it has good grounds to fear that the king, at his coming, will cast him out. For we are told: The king went in to see the guests; and he saw there a man who had not on a wedding garment. It is we, brethren, who attend the marriage of the Word: who believe in the Church, are nourished by the Scriptures, and rejoice in the union of God with the Church. I would have you consider very carefully whether you attend the feast in the wedding garment. Weigh your actions in your heart one by one: whether you foster hatred of anyone, whether you envy the good fortune of others or through malice seek to injure them.

See the king entering the feast, see how he scrutinizes the disposition of our heart. To that man whom he finds stripped of charity, he says in rapid anger: "Friend, how camest thou in hither not having on a wedding garment?" It is striking, dearly beloved, that he calls this man "friend" at the same time as he reproves him, as if his real meaning were: Friend and no friend; friend by faith and no friend by his actions. But he was silent, since - with what pain we must say it - in that final judgment no word of excuse can help us, for he who accuses us outwardly is also he who accuses the soul's interior depths, who is a witness of our conscience. And yet we cannot forget that, if anyone has this garment of virtue, although not perfectly woven, he should not despair of obtaining the forgiveness of this merciful king when he comes, since he himself gives us this hope when he says through the Psalmist, Thine eyes did see my imperfect being, and in thy book all shall be written (Ps. 138:16). We have said these words for the consolation of those who have charity, although weak. We must speak now of those who lack it altogether. The Gospel continues:

Then the king said to the waiters: Bind him hand and foot ... and cast him into outer darkness; there shall be weeping and gnashing of teeth. That rigorous sentence will bind the hands and feet of those who do not restrain themselves now from wicked actions by amending their life. In other words, suffering will bind hereafter those whom guilt binds here. The feet which refuse to visit the sick, the hands which refuse to help the needy, are now voluntarily unbound to any good works. Therefore the willing slave of vice here upon earth will hereafter be the unwilling prisoner of endless torments. It is apt to say that he is cast into the outer darkness. Interior darkness is the blindness of the heart, while the outer darkness belongs to the everlasting night of damnation. That man is damned, then, who is banished into outer, not interior, darkness for he is expelled against his will into the night of condemnation who, in this life, fell willingly into blindness of heart. It is said that there will be weeping and gnashing of teeth; the teeth of those who satiated themselves in their intemperance on earth will be set on edge in hell; their eyes will weep because in life they satisfied them with the sight of unlawful things In this way, each member will suffer a particular torment as here it was used for the satisfaction of a particular vice.

But now that one man has been expelled, one who represents all the various types of evil, a general warning to all is given: Many are called, but few are chosen. This is indeed a terrible sentence, my dear brethren. Consider that all of us have been called, by faith, to the marriage of the Heavenly King. We all believe and confess the mystery of His Incarnation, sharing in the banquet of the divine Word. But at a future date the King of Judgment is to come. We know that we have been called; we do not know whether we have been chosen. It is all the more necessary, therefore, that we abase ourselves with humility, since we have not this certainty. There are some who never tried to do good; there are others who, although they began once, failed to persevere.We see one man pass nearly all his life in wickedness, but as he nears its end he returns to God by repentance and true penance. Another may seem to live the life of a saint, but end his days by falling into error and malice. One begins well and ends better; another plunges into evil from an early age and goes from bad to worse throughout his days. Each man, then, must live in fear, for he does not know what is to come, since we must never forget, but rather often repeat and meditate on the words: Many are called but few are chosen.


An excerpt from Parables of the Gospel by Saint Gregory the Great, Nora Burke, trans., Scepter Publishers, Dublin, 1960.
http://agapienxristou.blogspot.ca/2015/05/and-when-king-came-in-to-see-guests-he.html
Posted by Agapi en Xristo at 9:38 AM