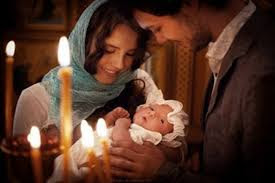 Once I was helping a priest during baptism. When the mystery ritual was over a woman with a small boy entered the baptismal room accompanied by a man who looked Asiatic. The woman started asking to baptize the boy as they were leaving the town that day. The man introduced himself as a godfather-to-be. "Are you wearing a cross?" asked the priest of the man. "What for?" was the reply. "What do you mean — what for? Aren’t you an Orthodox believer?" — "No, I am Muslim," — replied the man.

This anecdotal episode shows vividly how lightly people take the task of choosing godparents. A large majority of them do not comply with the minimal requirements of the Church: they do not know a single prayer or how to cross themselves, they did not read the Gospel, they do not wear a cross. Some godfathers think it proper to "have a glass for bravery" before coming to church, godmothers are sometimes dressed immodestly and overusing cosmetics. And almost nobody knows anything about what the role and responsibilities of godparents are, or what they should be at all.

According to the traditions of the Church an infant should be baptized on the 8th or the 40th day after birth. Clearly, to demand at this age faith and repentance — the two main requirements for unity with God — is impossible. Therefore, "godparents" have existed since ancient times — people, who according to their faith baptize the child. (In passing one must note that godparents are not necessary for those over 18 years of age.)

After the baby is immersed in the font a godparent is to take it in his or her arms from the priest. That’s why in Slavonic a godparent is called a "recipient." Doing so, a godparent assumes responsibility to bring the child up in the spirit of Orthodoxy and will be held accountable for the upbringing at the Last Judgment. To their last day, godparents pray for their godchildren, they teach them to be faithful and devout, and they introduce them to the mysteries of the Church. That kind of connection between children and godparents is deeper and more everlasting than between birthparents and children. Both the destinies of the child and the godparent depend on how thoroughly those obligations are fulfilled by the godparent.
Posted by Agapi en Xristo at 10:23 AM

Email ThisBlogThis!Share to TwitterShare to FacebookShare to Pinterest
Labels: Godparenting