Why all the Fuss about Christmas? 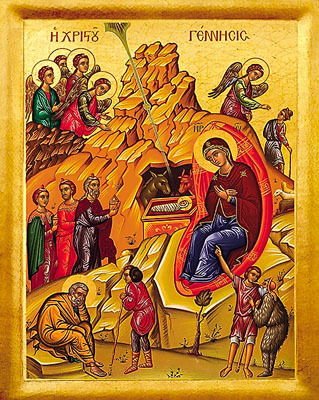 The nature of the “Christmas Season,” which has unfortunately has become known as “the Holiday Season,” is now mostly devoid of Jesus Christ for which this celebratory season was originally created. But wait! What are all the parties and all the gifts piled up under the Christmas tree for? Be honest. In our celebrating have we not forgotten why we celebrate? This is supposed to be the time when we celebrate the Incarnation of God. Think about what we have forgotten and why is it so important to re-remember. Ask yourself, "Why is this spiritual event so significant for our salvation? What is the 'Season' really about?"

One may say that even the incarnation of God was not sufficient for the salvation of mankind. For today we can witness the gross neglect of Him even in this most holy period. But this is precisely why God chose to come as fully man. We seek happiness with many parties and expectations of gifts like ignorant children. We are like blind men wandering aimlessly in the city square looking for a lost coin. Blinded by our limitations and separation from God we are unable to see what it is that God expects of us so we can be reunited with him in Paradise.

The Incarnation is much more than a baby in a manger, kings bringing gifts, or some supernatural star in the sky. If we are blind and unable to see what it is that God expects of us, what can God do to help us over come this blindness? He can become like one of us and show us and ask us to follow Him. This is what He did. This why we should celebrate and give thanks. This we are in need of re-remembering.

The gift of the Son of God is a most merciful gift that God has given us. With it comes not only clarity about how to live, but the establishment of the Church to aid us in overcoming our blindness––even 2000 years after the historical event of His Incarnation. The Church gives us many aids for our spiritual healing. The Sacraments of His Church bring to us the powers of the Holy Spirit. The ascetic practices help us develop the self-control with the aid of the Holy Spirit so it can work freely through us, and the Scriptures that clarify how we are to follow Him. These were all given to us through the Church to aid us in becoming one with God, for eternal life in union with Him.

Saint Athanasius tells us the following about the nature of the Incarnation in his well know treatise On the Incarnation:
Whence, naturally, willing to profit men, He sojourns here as man, taking to Himself a body like the others, and from things of earth, that is by the works of His body [He teaches them], so that they who would not know Him from His Providence and rule over all things, may even from the works done by His actual body know the Word of God which is in the body, and through Him the Father…..
For as a kind teacher who cares for His disciples, if some of them cannot profit by higher subjects, comes down to their level, and teaches them at any rate by simpler courses; so also did the Word of God. As Paul also says: “For seeing (1 Corinthians 1:21) that in the wisdom of God the world through its wisdom knew not God, it was God's good pleasure through the foolishness of the word preached to save them that believe.” For seeing that men, having rejected the contemplation of God, and with their eyes downward, as though sunk in the deep, were seeking about for God in nature and in the world of sense, feigning gods for themselves of mortal men and demons; to this end the loving and general Savior of all, the Word of God, takes to Himself a body, and as Man walks among men and meets the senses of all men half-way , to the end, I say, that they who think that God is corporeal may from what the Lord effects by His body perceive the truth, and through Him recognize the Father.
God, the Creator of all creation, became fully human in the Incarnation, then voluntarily suffered and showed us the path to eternal life if we learn to live as he showed us. Then after He left this earth, He sent the Holy Spirit to His disciples and they established the Church for our healing. It was through God's arrival as fully human, while still remaining fully God, the Incarnation we are about to celebrate, that we are now able to know the way to eternal life.
Let's be joyful for the reason of the Incarnation and as the Christmas hymn proclaims:
"Today Christ is born in Bethlehem of the Virgin.
Today He who is without a beginning begins,
And the Word is made flesh.
The powers of Heaven rejoice,
The earth and her people are jubilant;
The Wise Men bring gifts to the Lord,
The shepherds marvel at the One who is born;
And we sing without ceasing:
"Glory to God in the Highest, And on earth peace, (God's) good will toward men".
Let’s put Christ back into Christmas.